In November of 1910 Roger Fry, art historian and critic, organised a show in London of Gaugin, Cézanne, and Van Gogh and created for it a new term: Post-Impressionism.

[These artists] say in effect to the Impressionists: “You have explored nature in every direction, and all honour to you; but your methods and principles have hindered artists from exploring and expressing that emotional significance which lies in things, and is the most important subject matter in art ...” (Roger Fry, quoted in The Impressionists and their Legacy, p. 645, Barnes & Noble, 1995)

The show caused a sensation and had a marked and prolonged effect on the development of 20th Century Art in Britain. Britishpostimpressionism.com explores the legacy of this milestone, through the work of some of the Grand Old Men of British Post Impressionism such as, Sir Claude Francis Barry, Sir Frank Brangwyn, Sir Gerald Kelly, and Sir Tom Monnington, as well as through the work of lesser familiar unsung heroes and heroines.

Catalogues that include works of British Post-Impressionists 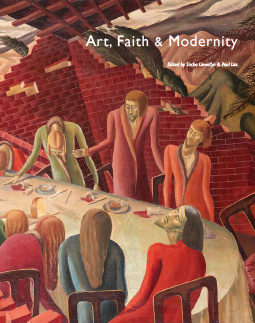 No account of 20th Century British art can overlook the numerous works of the period that were essentially “religious” in their content. Art, Faith & Modernity examines this question in Paul Liss‘ and Alan Powers’ essays and demonstrates the wide range of expression in more than 175 colour reproductions.

Anchored by Alan Power’s defining essay, Art Faith and Modernity presents a poignant argument – both visual and cerebral – for a reassessment of the important place that religious art continued to occupy in 20th century Britain. Art, Faith & Modernity is part of Liss Llewellyn’s on-going programme of exhibitions, produced in partnership with museums and cultural institutions, which seeks to reappraise some of the unsung heroines and and heroes of Modern British art. 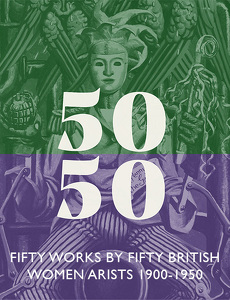 Ever since Linda Nochlin asked in 1971, ‘Why have there been no great women artists?’, art history has been probing the female gaze. Through scholarship and exhibitions, readings have been put in place to counter prevailing assumptions that artistic creativity is primarily a masculine affair. 50/50 functions as a corrective to the exclusion of women from the ‘master’ narratives of art. It introduces fifty artworks by known and lesser-known women – outstanding works that speak out.

Fifty commentaries by fifty different writers bring out each artwork’s unique story – sometimes from an objective art historical perspective and sometimes from an entirely personal point of view – thereby creating a rich and colourful diorama. This exhibition does not, however, attempt to present a survey or to address all the arguments around the history of women and art. Anthologies are of necessity incomplete, and many remarkable imaginations are not here represented.

Women artists have been set apart from male artists not only to their own disadvantage but also to the detriment of British art. While there were some improvements for women to access an artistic career in the twentieth century in terms of patronage, economics and critical attention – all the things that confer professional status – women had the least of everything. By showcasing just a few of the remarkable works produced, this exhibition draws attention to the fact that a vision of British twentieth century art closer to a 50/50 balance would not only provide a truer account, but also a more vivid and meaningful narrative. 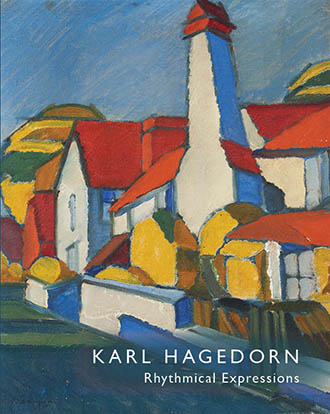 In many ways Hagedorn’s career both reflects and is part of wider tendencies in art, for example, in his retreat from radical modernism in the years following the First World War, which reflects the wider ‘Return to Order’ manifested in the work of artists such as Pablo Picasso, Andre Derain and Gino Severini on the continent, and artists such as Duncan Grant, Vanessa Bell and Edward Wadsworth in Britain. His watercolours of the 1920s encapsulate the search for solace in the landscape that appears in the work of so many others of his generation. These works have a distinctive clarity and call to mind Paul Nash’s question of whether it was possible to ‘Go Modern and Be British’. As an outsider, Hagedorn was not weighed down by such a sense of tradition. In the same period he was also designing eye-catching posters that patriotically called on their viewers to ‘Buy British’ (CAT. 41) applying the lessons of European modernism to commercial advertising for the Empire Marketing Board. 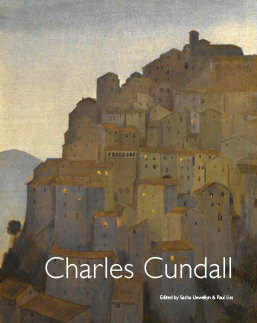 Between 1918 and 1970 Charles Cundall (1890-1971) exhibited nearly two hundred and fifty pictures at the Royal Academy and a further one hundred and seventy-five at the New English Art Club.  One hundred and forty-nine of his oil paintings – and countless works on paper – found their way into British public collections.  Statistics alone do not argue that an artist is important but it is surprising that this is the first publication on Cundall’s life and work…. In two genres Cundall excelled – he was a master of painting crowd scenes – whether at Irish cattle markets or sporting events such as Derby Day. He was also a master of painting industrial scenes, with compositions spanning half a century recording sites in England, Scotland, Wales and Greece. 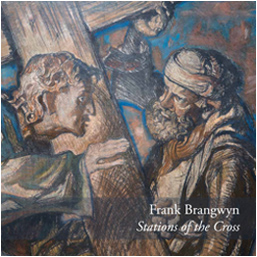 Frank Brangwyn
Stations of the Cross

This publication – which has been made possible entirely through the generosity of Tigger Hoare – was prompted by the discovery of a complete set of Brangwyn’s Stations of the Cross, painted in oil, which originally hung in St Michael’s Abbey, Farnborough. The participation of the Diocese of London has added a dimension which Brangwyn himself would have relished. Although brought up a Catholic, his faith was a strong belief in Christian values rather than an adherence to one particular creed and he told a friend that ‘Life here is nothing without God. The time comes when one has to leave it all, then one says to oneself what can I say I have done to please Him?’ … In his own self-effacing way Brangwyn did much to please Him. 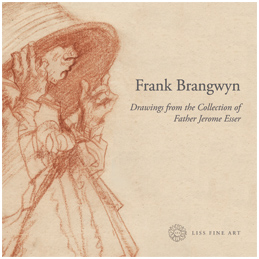 Frank Brangwyn
Drawings from the Collection of Father Jerome Esser

During his lifetime Brangwyn made large donations of his works to museums in the United Kingdom and abroad, including the Victoria & Albert Museum, the British Museum, the William Morris Gallery, the Albertina in Vienna and the Gruuthuse in Bruges. As a result of this munificence, substantial drawings by Brangwyn, especially his celebrated large sheets in red and black chalk, only rarely appear on the market. … The endless extant sketches that he made on the backs of envelopes, letterheads and scraps of paper are evidence that for Brangwyn drawing was a compulsion. In her forthcoming catalogue raisonné, Dr. Libby Horner has recorded over three thousand drawings by Brangwyn. … The drawings that became Esser’s collection, which have lain hidden for over half a century, were made up of works that Brangwyn, with characteristic modesty, had left in his studio with a written instruction, ‘most of this lot destroy’. Never intended for presentation, they explore and resolve alternative compositions and the relation of figures to each other and to the space they occupy. 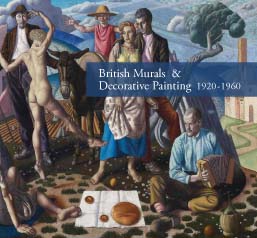 This book is illustrated with a series of specially commissioned photographs that record some of the least known but most remarkable mural cycles in Great Britain. In the vast majority of cases these works have previously only been reproduced in black and white if at all. … Today murals are rarely seen as the artist intended. Often they are partially obscured, especially where there has been a change of building use. Frequently works are completely covered up or painted over – examples include murals by Mary Sargent Florence, Mary Adshead, Eric Ravilious, Dora Carrington, William Roberts and Gilbert Spencer. Where murals survive they are more often than not displaced works. Historic photographs showing John Piper’s The Englishman’s Home at The Festival of Britain, in situ on the river side of the Homes and Gardens Pavilion on Belvedere Road, come as a revelation; a digital reconstruction of Frank Brangwyn’s Empire panels for The House of Lords, seen in situ as they were originally intended, gives a dramatically more favourable impression than their final installation in The Brangwyn Hall, Swansea.

Ziegler was born in London in 1903 and studied at the Central School of Arts and Crafts. He subsequently (from 1927 to 1930) studied at the Royal College of Art under William Rothenstein, whom he recalled as a lively and inspiring Principal. After leaving the RCA Ziegler taught drawing and painting at St. Martin's School of Art (where he was a visiting instructor for Figure Drawing and Painting) and Art History at Morley College in London and for the Worker's Educational Associa-tion. His work was widely reproduced in publications including Illustrated London News, Country Life, Architectural Review, Master Builder, Architecture Illustrated, Studio Artist, Courier, London Mercury Leader, Bookman and The Artist. His Royal Academy exhibits (which between 1931 and 1970 numbered 12) were mostly of his locality: Chelsea in the 1930s, Hendon and Hertfordshire in the 1940s and Hampstead from the 1950s onwards. In the final year of his life, 1971, Ziegler was given an exhibition at Kenwood House, London – the first living artist to be so honoured 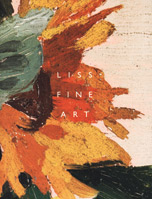 This current catalogue has been two years in the making. The 150 objects chosen have been divided into three sections: Paintings, Works on Paper, and Design. The Design section is fascinating because it presents items that are rarely seen, comprising works in plaster, works on tracing paper, works on lithographic zinc plates, original wood-blocks, copper plates, stage sets, and poster designs. Neither pure paintings, pure drawings nor pure sculptures, they are seen as commercially problematic. In this catalogue they are celebrated. The immediacy and the beauty of the original wood-blocks by Frank Brangwyn, the original copper plates by Robert Sargent Austin, and the plaster maquettes by James Woodford, are, we hope, self-evident. 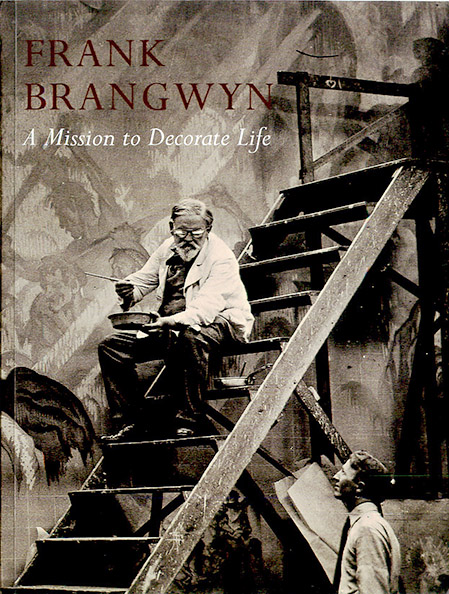 Frank Brangwyn: A Mission to Decorate

This exhibition, which was five years in the making, was the largest commercial show of Brangwyn’s work ever undertaken. Our aim was to represent every aspect of Brangwyn's remarkable oeuvre in the belief that the range and diversity of his talent has never previously been fully appreciated. For too long he has been known simply as a muralist or a painter or print maker. We want him to be seen in the round: a man whose self-stated raison d’être was ‘a mission to decorate life’ . 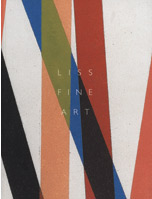 Many of the artists featured in this catalogue — Monnington, Jas Wood, Banting, Colquhoun, Stephenson, Medley, Rowntree, Vaughan, Canney and Nockolds —moved freely between figurative and abstract art. It was part of their journey. In their ambitious exploration to find a pure art that went beyond reality, they often stopped, or hesitated, and in many cases returned to figurative painting. Artists such as Bush, Knights, Kelly and Cundall remained throughout their lives purely figurative. Their best work, however, is underpinned by an economy of design, which not only verges on the abstract, but was fed by the compositional purity developed by the pursuit of abstraction. 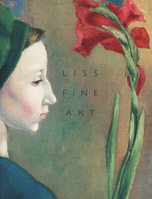 There is no obvious explanation for today’s neglect of artists such as Sir Frank Brangwyn, Albert de Belleroche, Clara Klinghoffer, Richard Carline, Charles Cundall and Sir Gerald Kelly. They were hugely celebrated in their day, and it is only a matter of time before the pendulum swings back. Art moves in and out of fashion: what one generation celebrates, the next forgets or rejects. The works of art do not change, nor their quality; in the life cycle of fashion it is only perceptions that alter What Monnington termed ‘works with integrity’ will always stand the test of time.