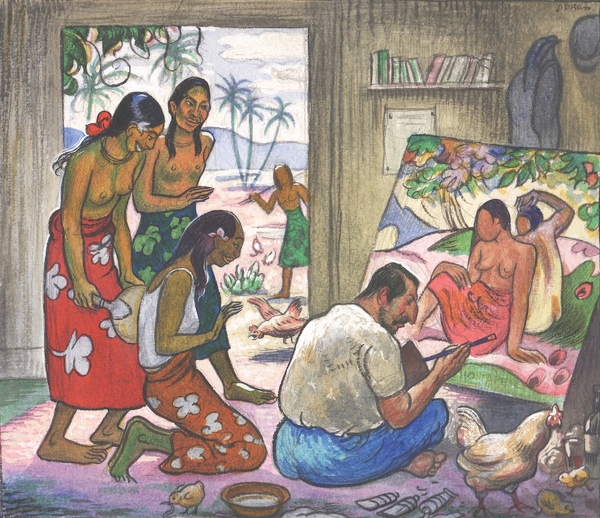 Inscription reads: Here is Gauguin at work in a native hut with a native audience. This terrific, half-demented being

carried his torment with him wherever he went. It is impossible to love the man Gauguin.

In his lifetime it is probable that he never loved anyone, man or woman. He simply used them.

He was a ruthless egoist, harsh, sensual, arrogant. He was wretchedly unhappy for the most part

even in this Polynesian Paradise. It takes more than a Sarong to make a Savage.

Gauguin ‘went Native’, as they say; but it takes more than the presence of ‘yaller girls’ or the

absence of white men, to decivilise a man nobly, to make a simple and dignified

Primitive out of a European neurotic.

Bliss produced two series of Artists in their Studios, exhibited in London exhibitions in 1934 and 1937.  Many were sold.

Ravilious, after seeing the exhibition in 1934, wrote to Bliss  as follows:

What an awfully good and lively show that was. Cezanne (sold I notice) and Van Gogh were damn good drawings - the landscape in the latter was boiling point. I loved it.  Holman Hunt, Toulouse Lautrec and Turner were the others I enjoyed most, the Turner I would have taken home if I could rub two halfpennies together......Congratulations on the show.....You should do well with these drawings. They are the goods.

'Around the late 1920s Bliss embarked on a decade-long series of comical works based on the Old Masters, which he called Masterpieces in the Making. This combined his erudition, his irreverence, his skill as a watercolourist and his wit as a caricaturist. The scheme was to depict each master in his own style of painting and in his own typical studio setting. So, for example, in Nature Morte, Madame Cézanne sits as still as any apple with her elbow on a tipped-up one-legged table covered in fruit. Her husband concentrates ferociously on his canvas.

There are at least 33 of them, divided into two groups, the Renaissance and the 19th century.The earliest shows the Pictor Ignotus (‘Painter Unknown’) who specialized in painting gory martyrdoms, and then comes Uccello unable to join his frustrated wife in bed because he is too enthralled by ‘that sweet thing Perspective’. Pisanello, Botticelli and Mantegna are followed by all the great masters in various droll tableaux including Raphael with a Pope and some camp cardinals, while Rubens wields a phallic mahlstick surrounded by his fleshy wives and children. In the later ones Gauguin is egged on by golden-skinned beauties, the Romantic Delacroix confronts the Classicist Ingres at a soiree, and a corpulent purple-trousered Courbet paints a sickly-looking Baudelaire.

These are mostly French but Stubbs, Morland, the Pre-Raphaelites and Haydon appear from England, and Goya from Spain. Other pictures outside the two groups show John Donne posing for his sculptured portrait in his shroud, Rembrandt in shades of gravy brown and a handsome Velázquez painting hideous Spanish royals. Subtitles helpfully explain some of the painter’s research sources. They are a tour de force and deserve to be published in book form as Douglas intended, although the reader would need a comprehensive knowledge of art history to appreciate their full drollery. They were exhibited in 1934, 1937 and in 1938 to positive reviews; some sold, but no publisher came forward to encourage him to continue with them, or with the literary figures he planned to satirise next'.

We are grateful to Simon Lawrence and Malcolm Yorke for use of the  above text which appears in the excellent Fleece Press publication from 2017, Gargoyles & Tattie-Bogles, The Lives and Work of Douglas Percy Bliss& Phyllis Dodd, (with text by Malcolm Yorke