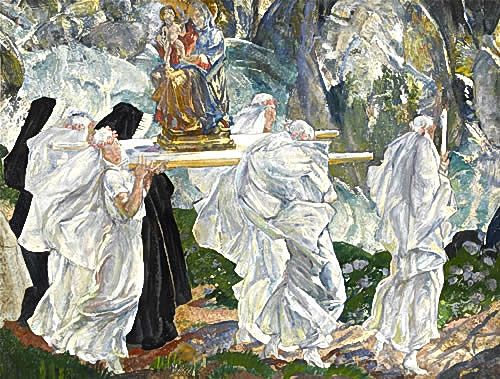 This scene is likely to have been painted in Spain, where Moira (who was of
Portuguese parentage) travelled extensively. During Holy Week and on other saints’ days it was common practice to carry wooden figures of the Virgin while on Holy Processions, often on small pilgrimages between villages. The girls in white are novitiates and are depicted here as young and frivolous before taking their vows of chastity, humour being added to the scene as their white habits are buffeted by the wind. Compositionally the painting is typical of Moira’s decorative approach, with a dynamic procession in the foreground, set against a flat and stylised landscape in the background (cf. The Cornish Floral Dance, repr. Harold Watkins, The Art of Gerald Moira, London 1922, plate 21).

We are grateful to Michael Barker and Magdeline Evans for assistance.