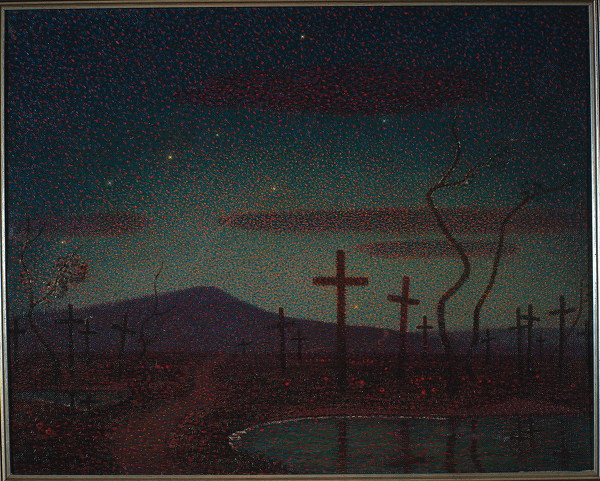 'The last fifty years are the most terrible of which history has any record and many of those, myself included, who have lived through them have often wished that they had never been born' (Claude Francis Barry, quoted in Katie Campbell, Moon Behind Clouds, Jersey 1999, p.74).

Barry spent most of the inter-war years etching and painting on the Continent. He had a particular fondness for Italy and it was only with reluctance that, at the start of the war, he abandoned his studio in Milan and moved back to England to return to St Ives.

Both a pacifist and an enthusiast for Italy, it is not surprising that he responded strongly to the Italian Campaign, producing a series of poignant paintings and etchings, especially around the subject of Monte Cassino.Though a victory for the Allies, the Battle of Monte Cassino, which took place between January and May 1944, resulted in appalling lossses: 54,000 Allied casualties and 20,000 Germans. It also resulted in terrible damage to the town of Monte Cassino and the total destruction of the historic monastery. Barry himself suffered a devastating loss during the closing weeks of the Italian campaign: an American bomb exploded in Milan, destroying his studio with all of his etching plates.

Barry was interested in astronomy, and his pictures frequently evolve around scenes of moonlight and starlight. Monte Cassino shows the Plough (Ursa Major) rising above the crosses, with Venus appearing to the left.At first sight a poignantly bleak composition, Monte Cassino, like most of his war pictures, strikes a note of optimism: Venus (symbolising love) is ascending.

We are grateful to Robert Mitchell for his assistance.