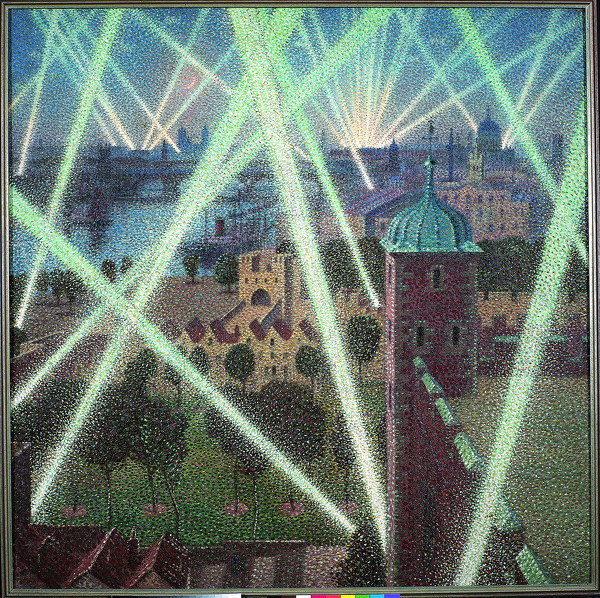 
Signed, inscribed with title and date on the reverse
Oil on canvas,

Barry's striking image of the Tower of London during the Blitz is closely related to his Heart of the Empire (see cat.36) in its neo-pointillist treatment and the futuristic use of searchlights, infuenced by Nevinson, to heighten the sense of a state of alert for an aerial attack by the German Luftwaffe.And once again he has re-arranged the actual scene for artistic effect in a delightfully romantic way.

The painting's viewpoint is the eastern of the two riverside towers of the White Tower, William the Conqueror's moated fortress located within the walls of the Tower of London,designed to impress upon the population thepower of the Norman Kingís recent occupation of Britain.On the skyline, above the old London Bridge,reading from left to right,are depicted Southwark Cathedral, the Houses of Parliament,the slim tower of Westminster Cathedral,one of the Victorian towers of Cannon Street Station, and Wrenís Monument to the Great Fire of 1666.Inevitably and rightly, St Paul's Cathedral dominates the scene.The left foreground, however, while charming and verdant,is entirely fanciful.In reality, for obvious defensive purposes,the Tower of London always had its feet in the waters of the Thames.The pretty ogival lead-cap with weather-vane of the tower in the foreground was one of Wren's attractive embellishments.As for the picturesque Tudor dwellings shown,they are actually half-timbered and sited on Tower Green,which is due west,not south,of the White Tower. No matter; the image is wonderfully evocative of an ancient city optimistically preparing to defend itself against the enemy, and as such is a work of art, not a dry topographical study.

A boat is shown moored at Tower Pier.Aptly for Barry's subject, and as a poignant coda, this was the departure point, after the State Funeral at St Paul's Cathedral on 30 January 1965, of Sir Winston Churchill.

We are grateful to Michael Barker for the above text,and to David Capps, Graham Miller and Robert Mitchell for their assistance.