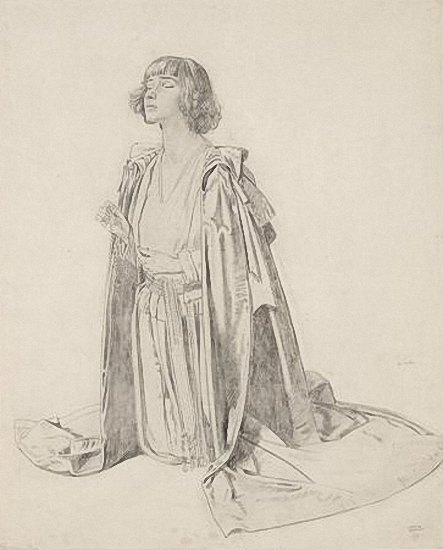 All three paintings were preceded by preparatory drawings of exceptional precision and sensitivity.The model for this drawing is believed to be Connie Martin,a professional artist's model, living at the time at 258 Kings Road, Chelsea.The same pose is found in a number of Orpen's paintings, including early studies for The Western Wedding and, in his later work, Palm Sunday 1931. Orpen was possibly inspired by the figure of Mary in Piero della Francesco's The Nativity c.1483-4 (National Gallery, London), and drew inspiration from that artist for all three of his Irish allegorical works.

According to the artist's studio account book, this study, referred to as 'Kneeling Figure of Woman ... for Wellí,was originally intended for Mr Vivian,although it in fact appears to have been acquired directly from Orpen by Mrs Howard (Florence Evelyn) St George,with the finished picture.

The above notes have been extracted from an essay written by Christopher Pearson, the unabridged version of which can be read in the biography link.